FlySafair started selling tickets online on Monday 23rd September 2013, with a one-way ticket from Johannesburg to Cape Town costing R798. FlySafair has not ruled out other destinations, such as Durban, in the future. FlySafair is a brand new  high value airline which already has a proud heritage.

FlySafair are now officially the world’s most punctual airline which is an incredible achievement for a South African domestic Airline.

During that time, they have reliably and successfully transported medical supplies and food relief into inaccessible territories for the United Nations, the World Food Program (WFP) and a host of other international aid agencies.

So, it seems that getting great deals on Flysafair domestic flights is about to become even more exciting for consumers. This new airlines is guaranteed to bring cheaper flights to our skies as competition hots up. Be sure to signup to our newsletter as we continually bring you special offers on Safair  flights.

Sign up to our newsletter as we continually bring you special offers on Safair flights. 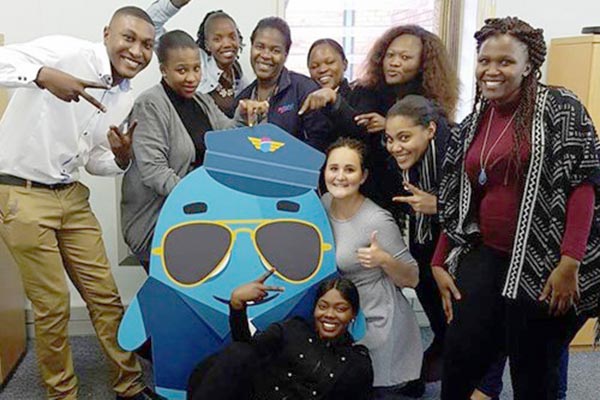 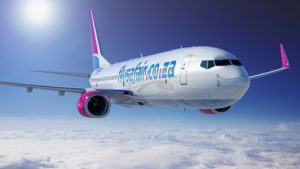 Booking your flights couldn’t be easier. Simply enter your Safair flight booking requirements into the search box and within a few seconds you will have all the information you need to plan your trip. We compare thousands of cheap flights together with all the other airlines offering flights on the same routes to ensure you get the best possible deals and lowest prices on FlySafair.

At Domestic Flights South Africa, we search relentlessly for comparable flight prices. Below is a comprehensive list of the Safair flight bookings as they take place and highlights the cheapest flights on offer. Some of the more popular flights include;  FlySafair cheap flights from Durban to Johannesburg, Safair flights to Cape Town and Durban as well as flights from Port Elizabeth to Johannesburg.

Prices based on live searches up till 20 Jun 06:00 and are subject to change.

Prices based on live searches up till 20 Jun 06:00 and are subject to change.

Where To Buy FlySafair Tickets?

Right here of course. At Domestic Flights South Africa we guarantee the best prices on Fly Safair tickets. Use our FREE Flight Booking tool and get your tickets booked and paid for in a few minutes.

By comparing millions of Flysfair flights during the course of the year we are able to offer you Safair Cheap Flights. Fly Safair often do NOT include the cost of baggage in their ticket prices which allows them to be perceived as cheaper, often displaying flights from as little as R399.00

After having recently added 2 new routes FlySafair now fly to the following destinations in South Africa:

Where does FlySafair Fly To?

[wptm id=11]FlySafair just announced the introduction of new routes between Durban’s King Shaka Airport and East London as well as Durban and Port Elizabeth. Commencing from the 27th November 2017 – tickets are on sale from R399.00 already so don’t miss out. A limit of 20kgs will apply per bag. Should you purchase EXTRA LUGGAGE your total limit should not exceed 40kgs. NOTE: Any bag with a weight over 32kgs will be transported as CARGO Hand luggage weighing in excess of 7kgs per bag or too large to fit into the overhead stowage compartments will need to be checked in to the hold. Hand luggage maximum size dimensions (56cm x 36cm x 23cm) Unaccompanied Minors and Pets Unfortunately, the airline does not allow unaccompanied minors on its flights. Only children over the age of 12 are permitted to fly alone. Any children under the age of 12 are required to be accompanied by a passenger 16 years or older. FlySafair flights are unable to transport pets. Special Needs Requirements for special-needs passengers must be concluded with ‘FlySafair’ within 48 hours of departure. Meet and wheelchair assistance is provided by  staff from check-in counters, to and from the aircraft, and into the arrival hall. Passengers may use their own approved aviation oxygen and should check the website for applicable regulation portable oxygen concentrators allowed on flights. For safety reasons, the airline does not accept ‘stretcher’ passengers. Guide dogs are carried free of charge provided the passenger is fully dependent on the animal proven through the necessary documentation. Pregnant women who are less than 28 weeks do not need to notify the airline, but those that are 28 to 34 weeks pregnant must present a medical certificate confirming fitness for air travel. The airline does not accept pregnant passengers from the start of 35 weeks onwards. No pregnant passengers may be seated in emergency row seating. Be sure of your requirements when making your booking to avoid paying a penalty for changes. If you prefer certain seats you can choose a pre-selected seat in front for an extra R60, at the back for an extra R40 or an extra-room seat for an additional R100. These are not included in your ticket prices.

Check-in on flights commences two hours before the flight departs and ends 40 minutes before takeoff. All passengers are required to produce photo ID for check-in.  Infants and children will be required to produce a certified copy of their birth certificate. Checking-in online before arriving at the airport saves time and helps avoid the long airport queues. Online check-in opens 24 hours before departure and closes 4 hours before takeoff. You will need your FlySafair reference number and the travellers surname to complete the online check-in process. If you have checked in online, you will still need to go to the bag drop-off at the airport if you have bags to go in the hold. Last month, I used a FlySafair flight from Cape Town to Johannesburg for a business tour. I was really impressed by the spacious seating on the 737-800, smooth boarding and great service onboard (...)

I have recently travelled with FlySafair from Johannesburg to Cape Town. I had used a web portal to book flight tickets to Cape Town, which was offering 20% discount on booking flight deals. I fo(...)

This was my first flight with FlySafair, where most of my previous flights have been with Kulula. It’s safe to say that I was very happy with the flight – with the entire experience. I flew from (...)

To begin with, in my review of this airline, I would like to point out that the baggage claim is super-fast. A definite plus going on here! Flight attendants are um, attentive. The seating was ok(...)

Happy Customer
Flysafair I will be back

Let’s begin with the online booking for FlySafair – it’s good – easy to add on extras if you so wish to. Boarding is smooth, and has been every time I have flown with this airline, which is about(...)

First time I’ve flown with FlySafair and it was a joy! I took a return trip between OR Tambo and George. First off, booking and boarding was simplistic and a breeze. I’d read some previous review(...)

I booked my Flysafair flight through domestic flights South Africa. I got a great deal on my flight prices. The only issue I have with Flysafair advertising the lower prices is that the baggage c(...)

Efficient all round
J Mulrooney

I was on the Cape Town to Johannesburg return in early May with FlySafair. It’s relatively new to the internal flights scene, and came in at around half the price of its rival, Kulula, for this p(...)

Pretty new to low cost South Africa-bound flights, FlySafair provided me with a good all-round experience. The online booking is fast and trouble-free, though you do have to purchase checked-in b(...)

Flew on a Boeing 737-400 at economy rating from Johannesburg to Cape Town in late May this year. First up, I liked the booking experience with FlySafair and they do allow for additional baggage a(...)

I did the CPT to JNB in March, 2016 and found everything about the FlySafair flight to be a positive experience. Good online booking service and extras can be added if required, though I had only(...)

My favourite time of the year is when I get to see Table Mountain. It means I am officially on holiday and what better way to spend it than in the Mother City. A shout out to Flysafair too for al(...)

I have been a loyal Safair Customer since they took to the skies because I travel between Cape Town and Gauteng quite frequently and never had a bad word to say about them.

Flying my family of 5 around South Africa is always an experience. This time we flew Cape Town - Durban and back on Flysafair. The flight itself was pretty decent, courteous staff and generally a(...)

Truly the best experience i have had so far when booking my travels online. Super easy and user friendly platform.
I had a plethora of choices when it came to selecting the airline that i wante(...)

My flight experience with Flysafair was excellent. Air hostess was friendly and helpful. Have recommended Flysafair to friends.

I have flown on FlySafair many times now and they are just so on time every time.
The prices are great for inter city travel, just to get away for the weekend.
The aircraft is spacious and th(...)

The 28/06 landing at 16:05 departing from ORTambo flysafair flight.

I have flown all over the world and I can say hands down without a doubt that the flight above and the pilots flying that pl(...)

I was travelling from Durban to Cape Town on the 04th of July. I was so impressed with the service in the plane and the time arrived at Cape Town. We arrived earlier that the projected time to ar(...)

i have been using Domestic Flights South Africa to book my flights for many years now and have never had any issues. Great service offering all round thank you.

I can recommend flysafair for their wonderful service with my moms flight JHB to PE. She needed wheelchair assistance and they were absolutlely amazing. The staff is helpful, friendly and such (...)

I was very nervous to travel alone with my little brother. Safair staff was friendly and tried to make me comfortable. They were very kind and kept checking on us.

So I had a flight with flysafair. I was at the airport an hour early and was waiting for them to announce that boarding gates have been opened. I then waited in a queue at O R Tambo International(...)

Just before the fasting month my husband decide to take me for a 1week holiday to cape town...we check online for the cheapest tickets...n as we never fly safair ...we took a chance.... I 'he alw(...)

I managed to scoop one of the coveted R4 tickets from Flysafair and decided to enjoy a weekend in Durban, Umhlanga Rocks. What a beautiful place. I was super impressed with the vibe along the mai(...)

Flysafair are currently one of the few airlines offering cheap flights to Port Elizabeth for me. Not many options when flying to the Friendly city make it a tad rough trying to get there. PE is a(...)

I recently flew to Port Elizabeth from Johannesburg via domestic airline Flysafair. The entire process was very simple, even for an old lady like me. I booked online and got a great deal and the (...)

Bloem is a hard place to get to in SA. Not many flights available and prices are much higher than major routes. I used Domestic Flights SA to find the cheapest flights to Bloemfontein and it work(...)

I was very weary of travelling to Cape Town during Covid but had to see my family. I flew on Safair and everything was fine. The process was smooth and the staff were very friendly and helpful. I(...)